One example is a packaging table; a unit that gives workers a place to prepare packages for shipment without having to lift of push heavy objects. Another type of workstation, a modular workstation, is built with adjustable shelving and bins to help organize the workspace.

In offices or industrial complexes that use computers, workstations are equipped with CPU holders to keep the computers in place and safely out of the way. The primary benefit of an ergonomic workstation or workbench is that it helps a worker adapt the environment to his or her physical needs, rather than having to adapt to the limits of the environment and risk injury.

Workbenches that are built to be adjustable can be modified to meet the needs of employees of various heights. In many cases, the height of not only the workbenches but also desks, chairs and even drawers or cabinet can be altered to suit the user. Some workbenches have interlocking components that can be rearranged as necessary. In a busy setting, it may be more convenient to have quick access to overhead shelves, where in another place the tools or items on the shelf may only need to be accessed occasionally. Modular workbenches exist to reflect situations like these. 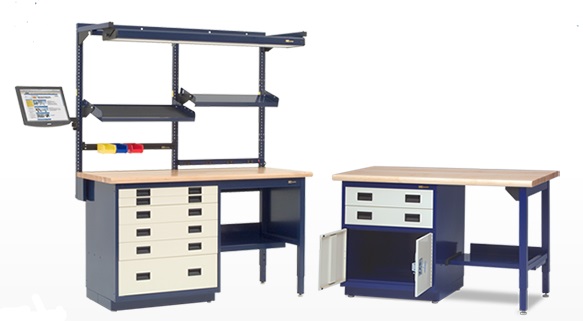 Distributors and manufacturers alike often talk about workstations and workbenches as if they were the exact same thing, but they do technically have two different meanings. “Workstations”, in industrial circles, refers specifically to assembly tables, chairs, storage benches, racks, laminar flow benches, cleanroom work benches, and office tables. Although “workbench” often refers to these very same items, it is meant to refer directly to assembly tables, storage tables, and lab work tables. It focuses on work surface areas instead of entire units with furniture, like shelving and storage.

“Workstations” in the broader commercial and manufacturing communities generally refers to either a) office, IT, home or school workplace furniture and computer work stations, CPU holders and furniture or b) computers and computer systems which provide a software “work station” for IT administrators.

To be clear, “Workbenches”, refers to equipment used in industrial manufacturing, with perhaps the general exception of woodworking and hobbyists’ workbenches, which are understandably related to industrial workbenches. Most workbenches are designed to include shelves reels and other components that make it easier to assemble parts.